April 9th, 1942 was a thrilling day for the estimated 8,000 people who filled the Dodger Stadium baseball field to watch an exhibition game between the Chicago White Sox and the Chicago Cubs.

After the game, Bob Lewis, traveling secretary for the Chicago Cubs, said this was one of the largest crowds he has witnessed for a Cubs exhibition game. Both White Sox and Cub officials were amazed at the way the Fort Dodge handled the game, the crowd and the entire affair.

The legendary sports editor and writer for the Des Moines Register, Sec Taylor, attended this game. In his column for the Sunday Register, he wrote “Fort Dodge promoted the recent Chicago Cubs – White Sox game in a big way and in major league style. The results were so satisfactory that those in charge of the promotion hope to make the contest an annual affair.” Taylor went on to say “the Chamber of Commerce committee in charge of the game, headed by O. C. Pfaff, its chairman, did such a good job that I heard only two complaints, neither of which is serious – one was because the ball park gates were not opened before 1:30 p.m. The other was from two women who had come to Fort Dodge with their men folk. They had planned to do some shopping while their husbands attended the game, only to discover that the town had not arranged the contest to bring shoppers to it. The stores were closed.”

It was noted that fans from five different states and 75 Iowa counties came to Fort Dodge to watch this game.

Most of the fans arrived at the ballpark when the gates opened at 1:30 p.m. hoping to get a good seat and watch the teams go through their pre-game drills and batting practice. However, the train that brought the Cubs and White Sox to Fort Dodge from their previous game in Tulsa, Oklahoma, did not arrive until almost 3:00 p. m., which was the scheduled start time for this contest. After very brief warm-ups, the game got underway- and it did not disappoint. In the bottom of the ninth inning with the Cubs up to bat and trailing the White Sox, Babe Dahlgren, the Cubs’ first baseman, blasted a 2-run home run to beat the White Sox, 16 – 14. The teams combined for 30 runs scored, 38 hits, five of which were home runs.

Below are the players that played in that game:

From its early beginnings and through the decades, sports has been intertwined in the fabric of Fort Dodge history, culture and nostalgia.

This section is currently under construction.

Anyone who would like to recommend a story about an iconic sporting event, accomplishment, or exceptional athletic team is encouraged to contact the Fort Dodge Community Foundation by emailing Randy Kuhlman at rk@fd-foundation.org or call 515-573-3171. 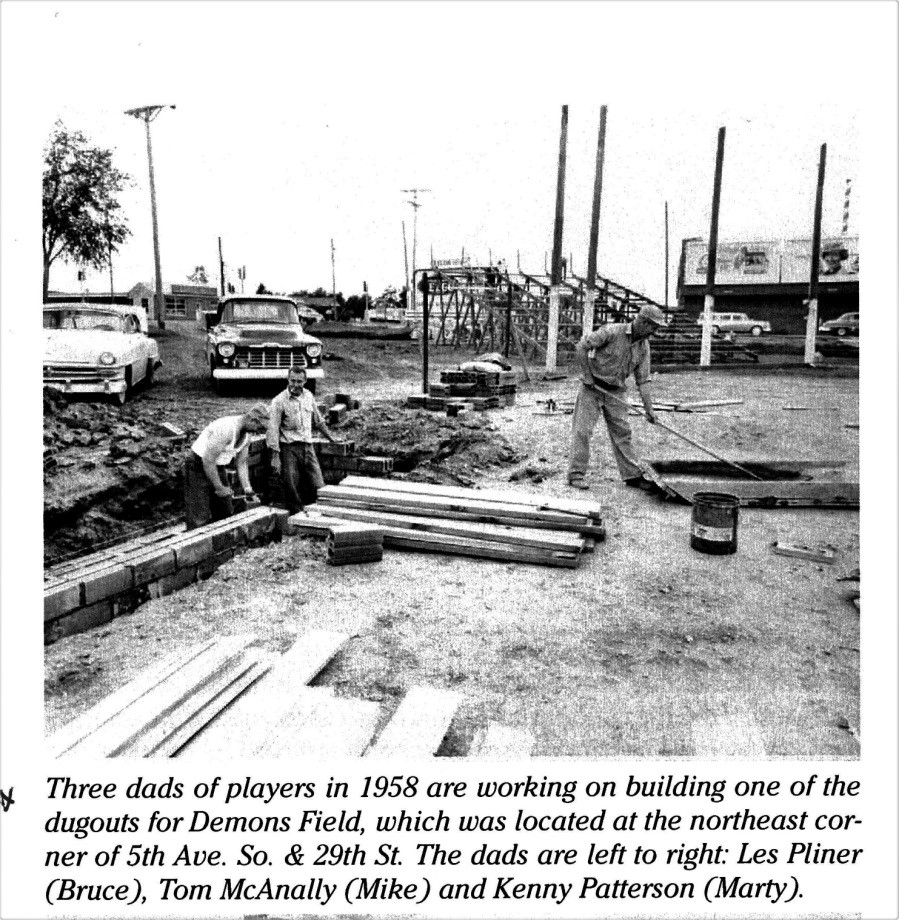 Fort Dodge sports history for the past 120 years is filled with many iconic teams. One of them is the Fort Dodge Demons that was developed and led by legendary baseball enthusiast and coach Jerry Patterson.

In 1956, the 12 years of age and under youth baseball team, Butler Demons, finished their season by winning their last 19 games. Picking up where they left off, they went 35-0 during the 1957 season. In 1958, that same bunch of kids, under coach Jerry Patterson, became the Fort Dodge Demons and won their first 13 games of that ’58 season. That legendary Butler/Fort Dodge Demons team amassed a 67 game winning streak that spanned across three seasons. This continues to be the longest streak by Fort Dodge baseball team at any level. The Demons team played baseball in Fort Dodge from 1956 to 1964.

Bill Goodman was a phenomenal young outfielder and pitcher for the Fort Dodge Demons baseball team. He belted 15 home runs for the Demons in the summer of 1962. Goodman went on to star at Fort Dodge Senior High under legendary coach Ed McNeil then later played six years of professional baseball, four in the Cincinnati Reds organization and two in the Minnesota Twins farm system. A visual handicap which severely hindered Goodman during night games prevented him from making it to and staying in the big leagues.

The Fort Dodge Demons baseball team will remain a legendary team in Fort Dodge baseball history for decades to come.

Fort Dodge sports history for the past 120 years is filled with many iconic teams. One of them is the Fort Dodge Demons that was developed and led by legendary baseball enthusiast and coach Jerry Patterson.

The next time you’re standing over a shot at the Fort Dodge Country Club, consider this: Hall of Fame golf legends Walter Hagen, Tommy Armour and Gene Sarazen did the same some 90 years ago.

Before PGA professionals became household names raking in multi-million dollar purses and superstar endorsement deals, they spent a lot more time in the trenches of our country. That often meant barnstorming tours to help supplement income or even make ends meet, and during an eight-year period of time, three of the game’s all-time best rubbed shoulders with the citizens of Fort Dodge.

“It would be like bringing Tiger Woods to our community,” said Dave Sergeant, a local attorney and Iowa Golf Association Hall of Fame member. “Just having the chance to see some of the better professional golfers in the world up close … you’re standing next to Walter Hagen the year after he won the British Open and right in the middle of his PGA Championship heyday (Hagen won four consecutive titles from 1924-27). The same could be said for Armour, who won the Open in ’31 and was here in ’32, and Sarazen, who was in the prime of his career.

“Right in the middle of all this success, they’re teeing off here at the Country Club.”

The details of how and why the sport’s icons made stops in Fort Dodge for exhibition matches during that period of time aren’t exactly known. Sergeant and local historian Al Nelson deduced it had a little to do with location and a lot to do with money.

“You can’t think of a professional golfer from that era the same way you do with modern (PGA Tour) players in terms of fame or fortune,” the 75-year-old Sergeant said. “In a lot of ways, the pros were even secondary actors compared to the amateurs of the time. The pros were just trying to put food on the table (a typical major winner from that era would only collect around $1,000).

“When the Great Depression hit especially (1929-33), they probably had to get even more creative. Fort Dodge could’ve been a stop and a way to make some extra cash if they were migrating west from Chicago on either (Highway) 20 or 30.”

Hagen — a man who, to this day, only trails only Jack Nicklaus and Tiger Woods on the career major list with 11 victories — played in an exhibition at the FDCC on Oct. 1, 1925. He teamed with Country Club pro Jack Canavan to defeat Bob McKee of Des Moines and Severt Thompson of Fort Dodge — a state Kiwanis champion — 1-up.

Hagen carded a 36-33–69 on the par-34 layout. Though newspaper records didn’t verify, it would have to be assumed that the foursome played the nine-hole course twice, given the FDCC didn’t become an 18-hole layout until the next year. An estimated crowd of 400 followed the action.

Armour, who captured the U.S. Open in 1927, the PGA Championship in 1930 and the British Open in 1931, teed off at the FDCC on Sept. 8, 1932. Armour and Canavan, a pro from Des Moines, were defeated by state amateur champ Denmar Miller and Pete Jordan of Des Moines.

“Armour had just won the British the year before,” said Sergeant, who has lived in Fort Dodge since 1949. “Again, it’s not like these guys were coming to Fort Dodge after they’d retired or something. They were in the prime of their careers. They were headliners in the sport.”

The Messenger newspaper article on the Armour exhibition did note the gallery was paltry, drawing only around 100 onlookers.

“(The crowd) was pitifully small in spite of the presence of the young men who hold Iowa’s two most glittering golf titles and an internationally-famous professional,” the article said. “The admission price ($1.10) was to blame for the paucity of the spectators, a dollar and a dime looming unnaturally large through the Depression haze that fogs the horizon these days.”

Armrour carded an even-par round of 70, with just one birdie.

Sarazen, a seven-time major winner, is one of five players in history to own a career “grand slam” (victories in all four majors). Like Hagen and Armour, he came to town during the apex of both his skill and popularity — on Aug. 30, 1933.

“Sarazen had won both the U.S. and British Open in 1932, and the PGA in ’33,” Sergeant said. Sarazen had been named Associated Press Male Athlete of the Year in ’32 as well.

The Fort Dodge Country Club formally opened as a new nine-hole course on May 29, 1912. Renowned golf designer and IGA Hall of Famer Warren Dickinson of Des Moines was the lead architect and supervisor of the project. The original clubhouse, which was also dedicated in 1912, still stands today.

The current 18-hole Country Club layout was completed in 1977.

“It’s just a fascinating look back into the history (of the FDCC) — both the course design and knowing these iconic golfers were here,” Sergeant said. “When I played (in the 2003 United States Senior Open) at Inverness (Club in Toledo, Ohio), I noticed that some of the original designs from their clubhouse were almost identical to ours. And it was built at almost the exact same time.

“There’s just so much rich golf tradition in our community. In my mind, knowing Hagen, Armour and Sarazen played here only adds to the mystique of it all.”

Giants of the Game

The next time you’re standing over a shot at the Fort Dodge Country Club, consider this: Hall of Fame golf legends Walter Hagen, Tommy Armour and Gene Sarazen did the same some 90 years ago.